Rotary Club of Springfield Southeast 2017-'18 President Lori Barnes and 2018-'19 President Bill Squires discuss what people should know about Rotary and why it matters. 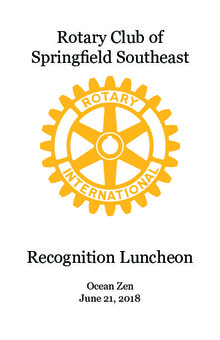 PDF
To read about our 2017-2018 accomplishments and financial impact, download our June 2018 Recognition Luncheon program.

Rotary Club of Springfield Southeast was honored on Nov. 29 to give funds raised by the 2018 Rock'n Ribs BBQ Festival to Good Samaritan Boys Ranch and Ozarks Regional YMCA. We are so proud of the work that these organizations do for our community.

Thank you again to everyone who came out to Rock'n Ribs. What a great event!

The annual Simpson Shrimp Feed was on Thursday, July 12, 2018.   This is the Club Assembly at which members give input and ideas on the club's operations and projects.

The assembly's name honors John Simpson, a late charter member of the club who hosted the assembly at his home for 47 years.

President Lori Miller Barnes concluded her term as president in an official ceremony on June 21, 2018. Barnes passed the presidency to Bill Squires.

Congratulations to our new board members.

Hundreds of volunteers and barbecue competitors hosted thousands of guests on April 20 - 21 to raise money for seven nonprofit organizations that serve children in the Ozarks.

This was the 19th annual Rock'n Ribs BBQ Festival. The Rotary and Rotaract clubs of Springfield plan and run the event but the nonprofit organizations that receive the funds also provide hundreds of hours of volunteer time to make it a success. Over the years, Rock 'n Ribs has raised just under $2 million for children of the Ozarks.

The Hands-On Committee planted trees and perennials, and replaced old mulch, on Friday afternoon, April 6, at Lutheran Family and Children's Services on North Glenstone Avenue. The service project was scheduled for Saturday morning but was moved up to Friday because of the forecast for snow and ice. Jennifer Baker, Carl Hutchinson and David Pomerenke definitely represented the club well!

When Paul Harris started the first Rotary Club in Chicago in 1905, he and three other men rotated as the host of the weekly meetings, with the others going to the host's office for lunch. To honor those meetings that gave Rotary its name, Springfield Southeast has fellowship lunches twice a year in which about six members host other club members for lunch at a site away from our regular meeting site.

One of those fellowship lunch days was April 5. These photos are from two of the six sites: the Creamery Arts Center in Jordan Valley Park across Sherman Avenue from Hammons Field (those are the photos in the brick room), and Homemade Delivered, 1330 E. Cherry St. Irwin Cohen, president of the Springfield Symphony board of Directors, and Ashley Walden, executive director of the Springfield Ballet, hosted members at the Creamery Arts Center. Denise LeBolt, owner of Homemade Delivered, hosted members in her commercial kitchen.

Rotary International President Ian Riseley asked the 1,230,399 Rotarians in 35,784 clubs worldwide to plant a tree by Earth Day, April 22, 2018, to raise awareness of the critical issue of worldwide deforestation.

The five Springfield Rotary clubs and Springfield Rotaract Club embraced the request. City Utilities of Springfield donated trees for the Clubs’ joint projects and the Missouri Department of Conservation made seedlings available to the 500+ local club members.

To celebrate the completion of this project, a Rotary Grove was planted in a ceremony at Jordan Valley Park on Wednesday, April 4. The public was invited to attend the celebration.

The project also included educational presentations at each club. It is anticipated that nearly 200 trees will be planted as a result of the combined efforts of the clubs and the partnering organizations.

Photos are by Dan Emrie.

Past President Bob Hammerschmidt and President-elect Bill Squires talked on April 2 about the club's committees and how they make the club run and fulfill its mission. Others attending the lunch, which is held monthly for new members but also open to experienced members, are Scott Gallentine, Ashley Walden, Jay Guffey, Lisa Blumenstock, and Josh Hartman, as well as photographer Dan Emrie.

Directors who will lead our club's avenues of service and their committee chairs in 2018 - '19 met in April for the annual Leadership Education Training Seminar (LETS). They heard from President-elect Bill Squires about his plans and discussed procedures, dates and budgets.

Photos are by Dan Emrie.

Bill White Insurance Agency in March 2018 earned a $10,000 donation for Don’t Meth With Missouri (MO).   Bill is an independent agent and member of Springfield Southeast Rotary Club who supports DMWM's efforts to stem this area's
epidemic of methamphetamine abuse.

The average age of first use of the deadly drug is 12.5 years old.  DMWM, a program founded and supported by Springfield Southeast Rotary Club, has been taking the fight against meth into schools with an education program tailored to fifth grade, seventh grade and high school students.
“Our educational programs are having a huge impact on getting Springfield area youth to say no to methamphetamine,” said David Hamm, board president of Don’t Meth With MO. “Fellow-board members like Bill who develop and present our educational programs are changing the conversation about drugs, one classroom at a time.”

For fifth graders, meth is in the future, in seventh grade students are beginning to feel peer pressure to experiment with drugs, and in high school the availability of meth is prevalent.

Don’t Meth With MO programs for their youngest audience focuses on leadership, goal setting and good vs. bad decision making. Their seventh-grade activity uses a Jeopardy game where students face off on their knowledge of drug dangers in categories like ‘Poison Potion’ and ‘RX Only.’ High school students gather annually for an assembly presentation by a former addict who tells his compelling story of addiction and recovery.
Launched in 2010, Don’t Meth With MO is patterned after a similar successful initiative created by a Rotary Club in Farmington, New Mexico. Rotary members split up presentation duties, which can become very intense during the school year. Fifth grade presentations roll out through October and every day committee members present at two schools, reaching a total of 37 schools in Springfield.

Seventh grade health teachers host Don’t Meth With MO presenters every quarter, and at the high school level, assemblies are presented for one solid week.
“Meth is used by 46% of families in our local juvenile services system. With an addiction rate of over 90%, the danger in Springfield and surrounding communities continues to rise for children living in meth lab homes who are at increased risk of everything from physical and sexual abuse, to exposure to toxic chemicals, burns, substance abuse and malnutrition,” said Bill. “At the end of each presentation we have the kids repeat our mantra ‘we are the future – don’t meth with us!’ as loud as they can so that the entire school hears it. Their young voices echo our hope for the future of Springfield in the ongoing battle against methamphetamine.”
A 2018 Safeco Insurance Make More Happen Award will be a huge help. The $10,000 donation to Don’t Meth With MO from Safeco on behalf of the Bill White Agency will contribute to the charity’s goal of being able to offer the school presentations to each Springfield school, every school year. The monies will also help them reach their goal to provide 2,000 backpacks with t-shirts, wristbands, pencils and bookmarks that reinforce the anti-drug messaging long after the presentations end.

The Rotaract and Rotary clubs of Springfield and Ozark played their annual tournament on March 21, 22, and 24 to raise funds for the Southwest Area of Special Olympics Missouri.   The tournament raises about $13,000 each year to help with the athletes' travel expenses in several sports.

The tournament started in 1987.   It was an idea of Springfield Southeast's Steve Scott, who was playing noon pickup games with members of Downtown Rotary club.  It grew from a game between two clubs in the first couple of years to a tournament that since then has, at times, included clubs from Bolivar, Lebanon, Ozark, Nixa and Branson, as well as all  the clubs from Springfield.